The Recession That Keeps On Giving, Here We Go Again - The Lean Times 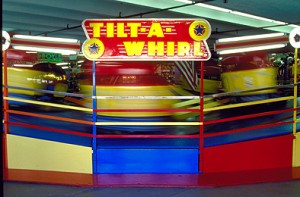 This recession just keeps on giving, doesn’t it?  Two years ago, upon returning from our first holiday in three years, I was made redundant from two long term freelance gigs.  Boy that threw me for a loop! One of the positions, I had held for six years when they decided to get someone younger and cheaper in, since I was freelance, I had no recourse.

I was very happy being a Portfolio Careerist then my other job as a photo agent, bit the dust because the person I was working for lost his biggest client therefore he could not afford to employ me. It all rolls down hill, yes?

Luckily, I was not completely unemployed because I got a four month contract at Glamour and still had a few bits and pieces of work coming in. It really did not hit the fan until January of 2012, contract over, dead of winter and no work in sight. I finally succumbed and went on Job Seekers Allowance in April.  It was not that horrible, demoralizing, yes, but if you work the system you can get stuff out of it. I took some classes, learned Sage and took a couple of short media classes, where I learned Photoshop, InDesign and Illustrator.

By this time, I was getting deeper into debt and still could not find any work until in September I got a temp job. At this point, I was so keen to get a job that I would have sold one of my cats.You get so much more than just money from being employed. You get a routine, you get social interaction and most of all you feel a lot more in control of your life.

I was offered a very full time position from the company I was temping for. I was overjoyed that I was back in ‘real’ work. I signed on the dotted line without worrying about the long hours, 42.5 a week plus a long commute. I was just delighted to be working.  After a couple of months, I started to feel a bit uneasy which is when I wrote about feeling  insecure having only one income stream.

I pushed my fears aside and worked like a good little worker, until lo and behold, I was stuck in the middle of a company restructuring, bam! I was hit again with unemployment. In a lot of ways, I am better prepared this time. I was given a month’s notice to start looking for new work and even more importantly I was given a bit of breathing room to think before I jump into anything again.

Now I am looking for new jobs, yes, I want my portfolio career back. I don’t want to have to rely on one income stream and I want to find a way to build a new career. I don’t want to take just any job out of desperation. I am hoping to, if it is even possible, to design my life instead of taking anything that is going.

Do any of you my lovely readers have experienced something similar? Any advice you can give?